Read more about it here.

Efgartigimod is based on the Abdeg technology that was developed in the Ward Ober laboratory at UT Southwestern Medical Center [Vaccaro et al. (2005) Nature Biotech., 23, 1283-1288].

Read more about it here and on the Argenx website here where a video explaining how the drug came from our lab can be found.

Sally announced as President of The Antibody Society (10th December 2021)

A cocktail of anti-COVID-19 antibodies developed using Ward Ober half-life extension technologies has been approved for use in the immunocompromised and those who do not respond to traditional vaccinations. Read more about it here.

Available at: https://aheadofthecurve.org.uk/ and here.

Recent topline data from argenx for Phase 3 trials in myasthenia gravis using Abdeg technology (developed in our laboratory) has been released. Based on these results, argenx plans to submit a Biologics License Application (BLA) to the U.S. Food and Drug Administration (FDA) by the end of 2020 for the FcRn antagonist, Efgartigimod.

Scientists at the Centre for Cancer Immunology have been awarded £2.2 million to develop next generation antibody-drug conjugates to treat cancer. Click here for more information. 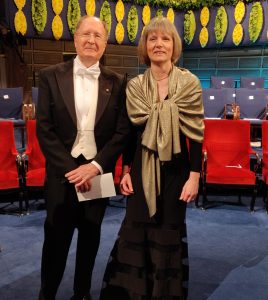 Sally was privileged to attend the 2018 Nobel Prize Awards ceremony in Stockholm as a guest of Sir Greg Winter, with whom she carried out research on antibody repertoire technology at the MRC Laboratory of Molecular Biology in the late 1980s.

Sally is lead organiser (with Steve Beers) of the FASEB SRC ‘Immunoreceptors and Immunotherapy’ in Snowmass, CO (10-15th June 2018)

Below is a summary of our performance in different categories:

Sungyong You and Eungjoo Lee win first place for their Senior Design project at UT Dallas on multiparticle tracking.

Global Medical Discovery features breaking research judged by GMD’s advisory team to be of key importance in science and medicine. Papers are selected from over 20,000 papers published each week from peer-reviewed journals.

A new version of MIATool, along with the FandPLimitTool and the EstimationTool, have been released.